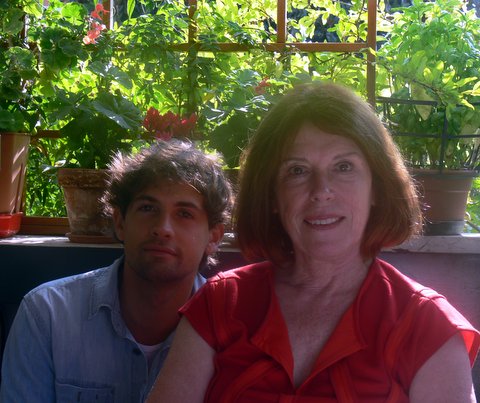 Me and Barbara in Italy

1) How did you fall in love with Italy and why?

First, I fell in love with the art and architecture during college. Going to Rome and Florence for the first time made the art I saw in books come alive! Then I fell in love with my husband, an Italian-American who speaks some Italian, and I began to love the language. We try to go to Italy once a year and to explore new places.

2) I know there is a strong Italian influence in california, can you explain why and in what areas does this affect the most?

Actually, there is probably a lot more Italian influence on the East Coast. Italian-Americans represent almost 19% of the population in Rhode Island and Connecticut (Bill is from New Haven), followed by New Jersey, Massachusetts and New York. There are 4% in California.

However, I think that the climate and vegetation and cuisine in California attract Italians here.

We have many Italian friends who have moved to the Santa Barbara area. In turn, other than Mexican fare, there are probably more Italian restaurants in this area than any other cuisine.

3) I know you have travelled a lot in Italy, what are the main differences, affinity and difficulties respect California or more in general, US?

We have travelled a lot in Italy but never lived there long enough to understand daily life and how to face real-life challenges like finding employment and housing, paying taxes and dealing with bureaucracy. But we do find the Italian people to be friendly, courteous and helpful. It may be idealistic, but we also find Italians to be more substantive in their appreciation of art. Too many Americans are shallow and follow empty television shows.

4) What have you done in the past?

My career has been in health care, from writing, editing and publishing to hospital administration, strategic planning, and marketing. My real love is writing, so now I am writing a blog in Italian about cultural differences, the Italian-American experience, and film and music and art: www.olivosantabarbara.com.

5) There are so many friends and acquaintances who want to come to study or live in the U.S., on their behalf I ask if it was hard to grow up and live there? Your country has helped you? There are job opportunities / study?

I think the opportunities and challenges in any country are directly related to the economy. We are just emerging from the longest recession ever. The United States seems to be leading the way, and every day you hear or see some positive economic news that unemployment in decreasing. Until job creation expands more rapidly, opportunities are hard to find. The government first tries to protect its own citizens, which makes it very difficult for foreigners to find work. This is true in Europe as well.

As far as growing up here, I think every generation faces unique issues. Right now the problems with guns and bullying seem to be top concerns, along with advantages and disadvantages of social media.

6) At some point you decided to stop in Santa Barbara, as well as the beauty of the place is there some other reason that you push in California with Bill, your husband?

Just before I moved to California, I lived in Chicago where the winters are bitter cold. I couldn’t wait to come to California. My first visit was in a February and I saw snow only as a dusting in the mountains, which was beautiful, rather than as a 2-foot hazzard underfoot. I was actually a little disappointed that it was too cold to swim either in the ocean or in pools in the winter here. The Pacific Ocean is calmer than the Atlantic, in general, but it is also a lot colder. Bill came to California to do his medical residency and because his brother lived here. We lived for many years in the Pasadena—Los Angeles area. Having grown up on the East Coast, we always wanted to be near the water. It’s good for the soul and I, in particular, like swimming and sailing. Santa Barbara is quite beautiful and the driving is so much easier than in Los Angeles.

Because of the Music Academy and the University here and Santa Barbara’s proximity to Los Angeles, the music and art world is very rich here.

7) Except for the east Coast and West Coast I haven’t visited anything else in the states but I got the idea that California is one of the best areas to stay, is not it?

I agree, but I am biased! Chicago is a big city, the waterfront on Lake Michigan is quite pretty, and there is plenty of culture, but the weather is hard to take. There are a lot of nice places in the Midwest, but it is fairly conservative. California is considered the most forward-thinking state and a lot of important social movements begin here—like Earth Day, many environmental causes, including no smoking laws, recycling, solar usage, etc.

8) Having a family in US or in California, is that difficult?

The nice thing about raising a family in California is that you can explore the state and play sports outside all year long. Therefore, many professional athletes, like baseball players, come from California. Tennis players tend to live in Florida because it’s easier to travel internationally (mostly Europe) from the east coast.

9) One of the first times I visited California I was very impressed by the high number of homeless people, can you tell us something about it? that affects the lives of ordinary citizens?

There are homeless people in all states, but it’s easier to live outdoors where the weather is warmer. The state of homelessness is very sad. Part of it is because we have become such a mobile society that we don’t stay with the family that we grew up with and therefore lack support when things get tough. There are other problems like drugs and mental illness. There are many social programs to help the homeless, but when the economy is bad, these are the first programs to be cut.

10) An issue that is close to my heart: food. I will not say that The grass is always greener on the other side, of course! Italian food is always in the top list world, but I must say that I really enjoyed the Californian cuisine, which is also close to ours and it is also very diverse. Which do you prefer?

Oh, I prefer Italian food! Of course, there are many regional variations in Italian food and I love exploring them all. What struck me in my visits to Italy was that you could drop into almost any Italian restaurant (not in touristy areas) for lunch or dinner and the food would be fantastic! I don’t think that is true here. One thing I do like here are the many “ethnic” restaurants—Thai, Chinese, Japanese, Greek, Indian, Ethiopian, etc. The Asian restaurants are much better in Los Angeles than in Santa Barbara, in my opinion. But I do love the seafood here and everywhere.